Getting  Libraries and Parks to Cooperate


"Current parks-libraries partnerships are relatively tenuous and unsystematic. Traditional institutional self-identities and definitions compound the effect of other barriers, such as professional protocols, that isolate staff and keep people within their boxes and individual funding streams. Too often parks and libraries compete with each other for funds instead of looking at collaborative ways to solve citywide issues and encourage development."
. -Libraries of the Future

Following are some more thoughts on this matter...


-State of the Branch Library

Branch libraries have a real problem,  the internet is turning  printed  matter into a legacy item. It's only by redefining their  mission for the 21st century will branch libraries survive. 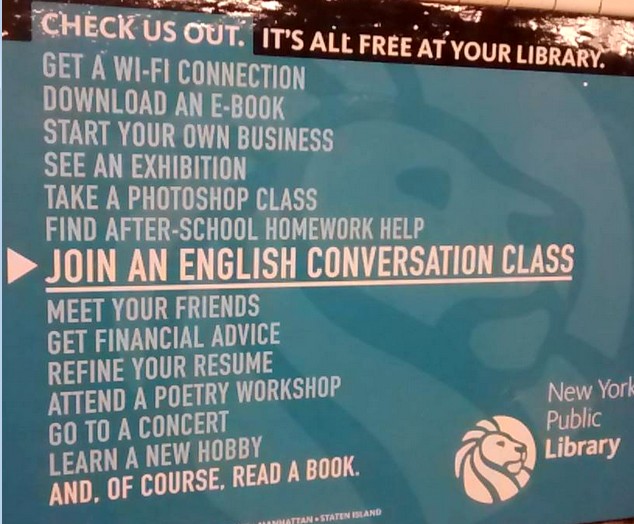 As this subway ad shows, NYPL are starting to market their functionality beyond printed materials. 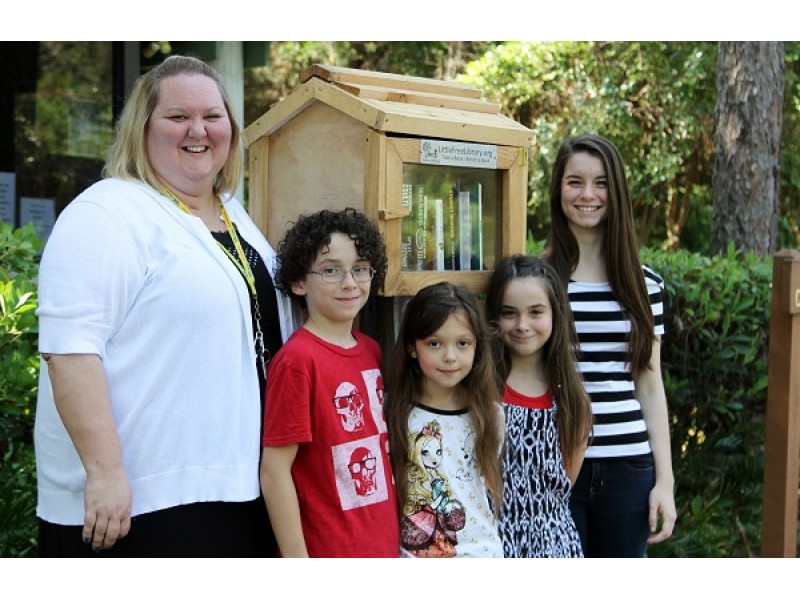 In Pasco County Florida, "The county has officially kicked off a Little Free Libraries program courtesy of a collaboration between the parks and recreation department and the library system...". link 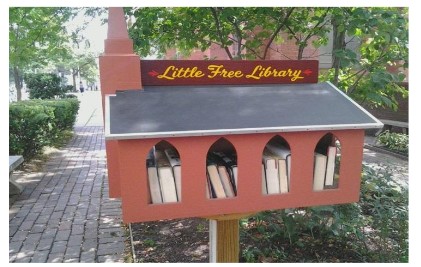 
Reciprocity I would think is a key to making both park and libraries happy. Here are two ways to do so

Marcellus Park and the Marcellus Free Library could work together to turn this lawn into  the Town of Marcellus Loose  Park. The Library adjacent to this park would be the staffed parkhouse. It could be a simple low cost loose park (hula hoops, jump ropes, hackety sack,  corn hole) or hold more expensive items too. 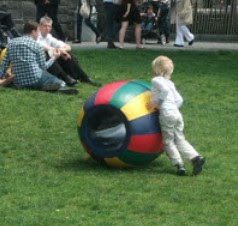 Either or both of these ideas would give town residents access to a lot more recreation choices they are currently offered in the town, and do so at a cost that the town can afford.

Library Storytelling in the Park 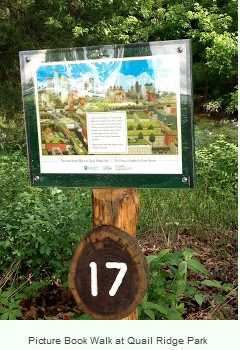 Skokie Public  Library in partnership with a Skokie Park  took 2 copies of a book, and posted the pages of it on stakes in a local park. Kids would read the pages and get exercise at the same time! link

Over 69 communities have or are considering installing a storywalk, I suspect a good number of them are parks/libraries partnerships.

Here's an idea-Set up a Storywalk so it terminates where there are books available to read/borrow ( either at a parks Little Free Library or a nearby library) .

Go York and Find Your Hero
This is a collaboration between York County Libraries ,  Parks and other York entities.  . It connects York Parks together and transforms them into a part of a larger Park which I will call the "Park  York".  Throughout "Park York" there are all sorts of heroes  to find, when you locate a Hero  you get a reward, an etching of one of the Heroes. 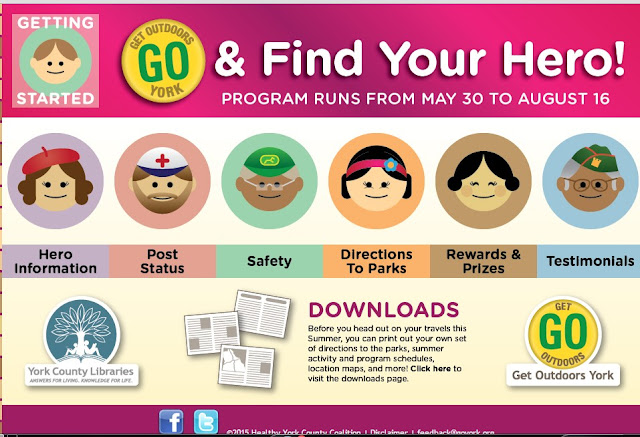 In addition to finding heroes at the parks, you can read about them and even meet some at York County Libraries this summer. Our librarians know that Every Hero Has a Story, and they have a super hero secret for you... reading is your super power! When you read 800 minutes this summer, you’ll scale your reading and learning abilities to hero heights! Read 20 minutes a day and log them online at yorklibraries.org/hero to unlock cool badges and earn prizes when you read 600 and 800 minutes! Get more badges after you visit parks, libraries, and attend programs. There are hundreds of free library programs planned just for you... attend one or all of them! You get to create your own super summer adventure!
So get outdoors, have fun, find your hero and learn their story! link


(I suspect  Every Story Has a Hero generally gets people to visit a park once, to play this game. What's needed is have a bunch of activities at these parks to keep people coming back)


A Playscape on the roof 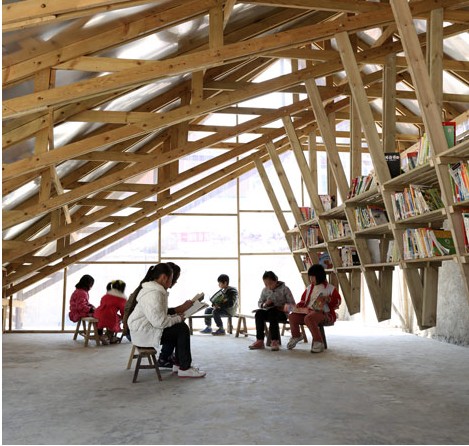 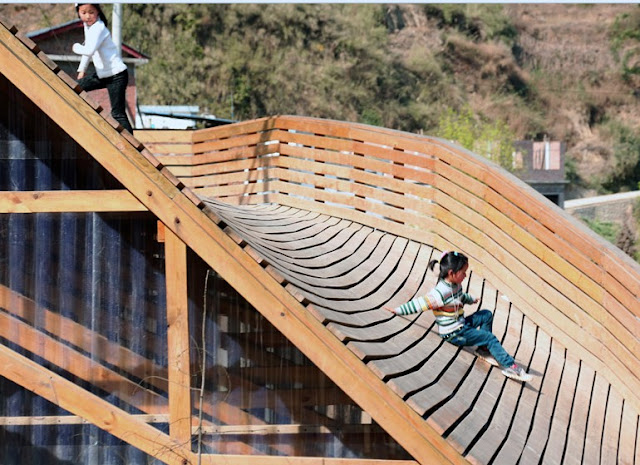 Children can clamber onto the curved roof of this community library in China, which architects John Lin and Olivier Ottevaere designed for an earthquake-damaged village in Yunnan Province (+ slideshow)
link

Not Compatible? Not True!
In Miami Dade County libraries are being brought into county parks buildings. The reason is to ease the budget crunch facing the library system.

The relocation of libraries to parks was opposed by a number of  groups: 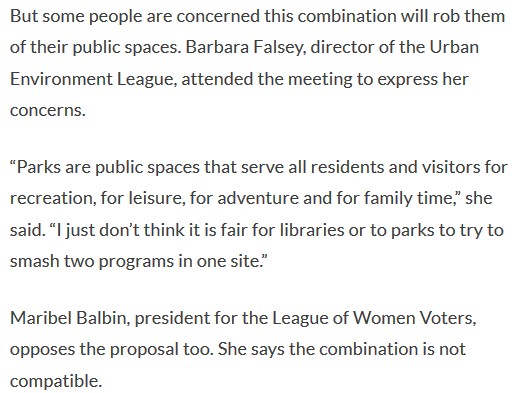 "Smash!" "Not compatible!" --not true! I strongly suspect that if  someone had educated these  groups  about the  synergy of libraries operating as "staffed recreation equipment libraries" for parks goers. they would not have opposed this initiative.


(Update  4/5/2016 : In November, 2015 we emailed several of the top officials at the Miami Parks Department and Miami Dade Public Library on the idea of having parks and Libraries work together. In March 2016 as part of the Knight Library Challamge Iniative, the Miami Dade Library system put in a grant proposal... Connecting Parks and Libraries.  A partnership to create a shared physical and programmatic connection between a City of Miami Park and a Miami-Dade Public Library. The grant is meant
would also serve as a model for many other locations throughout Miami-Dade County where parks and libraries co-exist.

The San Antonio Parks System got a grant to install Fitness stations.  It installed this one on a library lawn.  The library now has a fixed  equipment active recreation playspace on its lawn. No compatibility problem here!


Libraries engage the mind.  Parks & Rec departments engage the body. What a great match!  This is a gold mine for programs  – Lawrence Public Library has a very popular annual “Bookworms and Waterbugs” event during summer reading. Kids start out at the library for story time and then cross the street for a free swim.  Most Parks & Rec Departments go well beyond sports programs – ask for a table at a community festival they sponsor or offer to bring a mobile display of cookbooks to a holiday cooking class.  link

Visiting a Virginia State Park is about to get easier: all you have to do is stop by your local library.

The Library of Virginia, Virginia State Parks, and the Science Museum of Virginia are partnering up to provide more than 119 libraries with four nature backpacks each. Library members will be able to check out the backpacks for free. link

Anne Pascoe. City of West Torrens:The library holds joint activities with the Obesity Prevention And Lifestyle team (OPAL) around active play and nature play in various parks and playgrounds around our Council area. OPAL have created nature kits for loan from the Toy Library aimed at different age groups with equipment like bug catchers, magnifying glasses, a picnic rug and insect books for identification. We also occasionally hold events like volleyball tournaments or frisbee catching in the park as a school holiday activity.


LITERACY IN THE PARK

Literacy in the Park (LiP) was a new ICfL initiative during summer 2013. The Idaho Foodbank provides a free lunch program, called “Picnic in the Park,” for youth 18 years and younger. Foodbank trucks travel a circuit to Boise and Garden City parks and apartment complexes Monday through Friday during the summer to distribute lunches. The ICfL developed a traveling lending library that followed the Foodbank trucks for ten weeks.


Parks & Recreation – Libraries engage the mind.  Parks & Rec departments engage the body. What a great match!  This is a gold mine for programs  - Lawrence Public Library has a very popular annual “Bookworms and Waterbugs” event during summer reading. Kids start out at the library for story time and then cross the street for a free swim.   link

StoryWalk®, an exciting initiative that combines a children’s story with a popular walking route, was developed in September, 2007 by Anne Ferguson, a volunteer with the Coalition.  Ferguson selects a children’s book, separates the pages, laminates them, and attaches them to wooden stakes. She then drives the stakes into the ground at regular intervals along paths so readers can follow the story as they walk the route. Ferguson conceived of StoryWalk® as a way to inspire parents, teachers, and caregivers to take young children on a short stroll that will be fun for all. StoryWalk® helps build children’s interest in reading while encouraging healthy outdoor activity for both adults and children

Below is a storywalk that takes place in a park

Thinking Outside the Book: Partnering to offer a Picture Book Walk 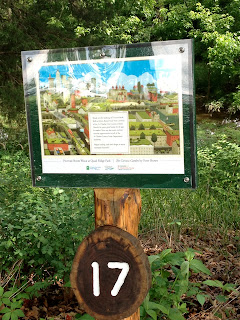 We now have a partnership with our county parks department. This Picture Book Walk has truly been a joint effort, with the library and the parks department sharing ideas and tasks. The library procured permission from Little, Brown and Peter Brown to use the book; secured funding for the purchase of the sign post materials; and prepared the book pages for mounting. The parks department provided the location for the 3-month-long event; built the sign posts; and got the word out to media outlets across the metro St. Louis area. We both put in time and resources for a big ribboncutting and kick-off event (more details on that in a future post). As a result, we now have a working partnership. We know how to work together to get things done. The potential in this new relationship is vast.  link

To have a partnership Libraries and Parks should both bring something to the table. What they bring may be at the same tiome or over time. Here's some  examples

The Dundee Township Park District and the Dundee Township Public
Library partnered to open a library branch in the park district's new
recreation center. The library did not have enough funds on hand for
new construction, and the park district had budget limitations
regarding the square footage of its new facility
. As a result of intergovernmental cooperation, park district patrons now get
convenient access to library services, and library patrons are exposed
to recreation programs and offerings. The shared infrastructure means
no duplication of parking, restrooms and common areas and allows
both agencies to expand their offerings while maximizing community
tax dollars.link


In Santa Ana, the director of parks, recreation and community services inherited the library in a reorganization, and made it a priority for the entire department. His first hand experience and knowledge with city management has been an asset in library youth development and other efforts.   link

The mission of libraries has historically been for learning and the mission of parks has been for recreation. By allowing parks and libraries to support each other in their missions  residents of our community can greatly benefit.


Library Cooperation in the 21st Century

Here is a library with , that also serves as a Fixed Park with Passive seating (far right) 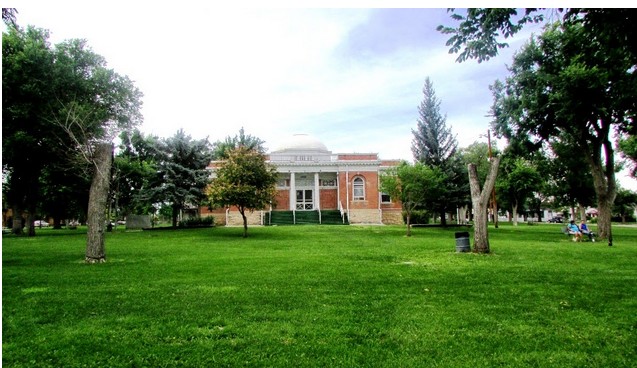 
and here is one that serves as a Loose Park 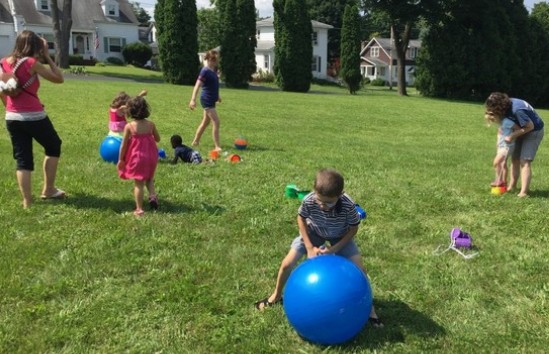 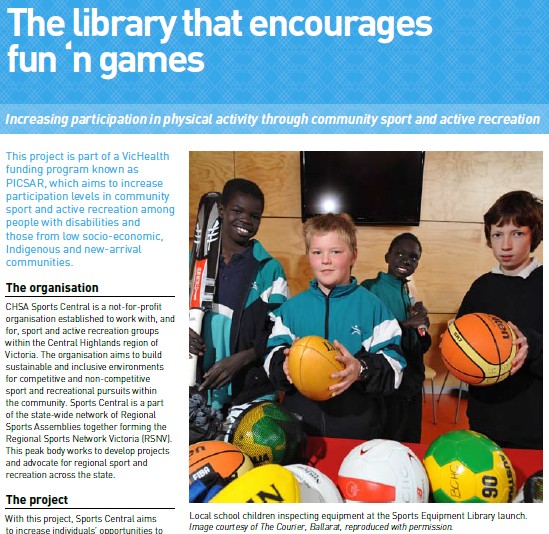 The Library that encourages fun and games

For the cost of one   Automated Library vending machine, a library  can set up between 12 and 25 keyed locker locations.

Here's how they would work

(Parks may be eager to cooperate if you also allow library patrons to borrow  keys to park maintained  recreation equipment  in lockers in parks.)